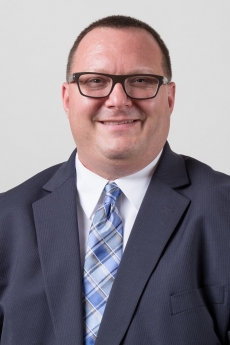 Chris Queen is a second-time graduate student at The George Washington University. This is his first year in the online program Cybersecurity Policy and Compliance in the School of Engineering and Applied Science. Chris originally hails from California, mostly from the San Francisco Bay Area, and he attended San José State University as an undergrad. Chris’s first master’s degree is in French into English Translation, with an emphasis on legal translation, from New York University.  In addition, he completed a certificate in Spanish into English Translation, also from New York University. Chris’s second master’s degree is in Paralegal Studies, also earned at The George Washington University.

In 2013, Chris was placed on the “Bender List,” an OPM database for federal employers to reach out to applicants with one or more disabilities, and he was subsequently placed at his former employer through this program. Subsequently, through the Workforce Recruitment Program (WRP) in his first GW master’s degree, Chris was placed in the WRP database and was selected for his current federal position, where he achieved permanent employee status in December 2017.

Over the past several years, Chris has participated in Disability:IN programs first as a student then as an alum. His activities with Disability:IN have included the mentoring program and the annual conference in 2016 and 2017. Over the past year, Chris has self-disclosed his status as an individual with a disability as a panelist for Second Year GW Medical Students and as a panelist at his place of employment. He aspires to raise awareness about successful career outcomes for individuals with hidden disabilities and to encourage employers to give candidates from this category of the disabled population the opportunity to prove themselves.