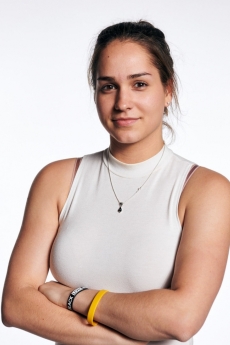 Pamela is a senior in the Elliot School of International Affairs at George Washington University. She was a junior transfer from Oberlin College where she studied neuroscience and theater and played for the Oberlin Women’s Soccer team.

Though originally from the Washington D.C. area, she spent a large part of her childhood abroad living in Singapore, where she graduated from United World College of Southeast Asia. Throughout her high school career, she played varsity soccer – joining her freshman year and becoming co-captain her senior year. In addition, she became very involved in the theatre community, acting in multiple theatre productions. During high school she volunteered locally in Singapore with disabled students at the National Equestrian Center, as well as with NGO’s in Indonesia, Vietnam and Cambodia.

At George Washington, Pamela is very active in the student theatre community, and has won awards for her performances. She is also on the board of the GWU chapter of the Tau Sigma National Honor Society. Tau Sigma is an academic fraternity that recognizes and promotes academic excellence in transfer students.

Her advocacy work started when she worked for World Vision’s One Goal Asia campaign, where she was able to represent World Vision at Women Win’s 2015 international conference and speak on the power of nutrition and sport for young women. This work continued during her time with TalentNomics Inc. where she was once again able to speak on a young leader’s panel about the mental and physical health benefits of sport for young girls and women. Since then, she has worked for the minority leader of the Senate Health, Education, Labor and Pensions Committee. She continued her work in healthcare this past summer by interning with Health:Further, a health-tech festival that brings together roughly 2000 people in Nashville to discuss the future of healthcare in our country.

As a member of the DSS Speakers Bureau, Pamela is passionate about raising awareness for the prevalence of non-visible chronic conditions, and the barriers that conditions of that type present in everyday life, in school, and at work. She was diagnosed with degenerative disc disease her freshman year of college following the end of the soccer season. As a result, she suffered multiple sports related injuries, as she tried to carry on her collegiate career, and developed related chronic conditions that ultimately ended her collegiate athletic career after a single season.